Event Archives
Below are a few of the events members of the Royal Society of St.George have attended in previous years:
2011
Saturday 28th May
The Major General's Review of the Trooping of the Colour
Members of the branch attended the Major General’s review of Trooping the Colour on Saturday 28th May, 2011 on Horse Guards Parade.  Photos of this event are in the Photo Gallery.
Thursday 21st April
Raising of the flag of St.George in Welwyn Garden City 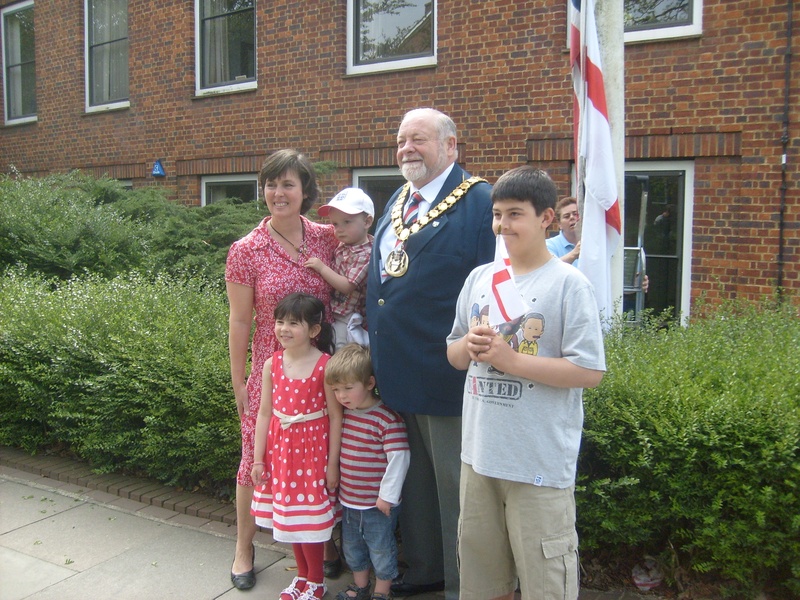 The date was due to St Georges Day falling this year between Good Friday and Easter Sunday.

As the date was also the Queens Birthday, the Council flew the Union Jack with the St Georges flag below this on the flag pole.

Joining the Mayor at the ceremony were the Deputy Mayor Carl Storer, Councillors and members of the RSStG, RBL & RNA.

After the ceremony a short reception was held in the Town Hall.

Photos taken at this event can be viewed on the Photo Page. More will follow as they become available.

Held at St. George's Church, Hanover Square. The Service recognised St. George's as the dedicated church of The Society and incorporated a memorial service to the late Ted Newton who gave so much as our last National Chairman. It was followed by a Champaign reception.

In April of 2010 cadets once again marched to the Cenotaph in Whitehall central London, as a combined collection of Army, Navy and Air Force Cadet units paraded together in celebration of St.George’s Day.

On Saturday 24 April 2010, Army, Air and Sea Cadets from London joined members of the Royal Society of St.George to mark St George's Day in an annual parade in Whitehall, which also  marked the 150th anniversary of the cadet movement.

More than 300 cadets took part in the parade and ceremony at the Cenotaph. During the parade a wreath was laid in remembrance of those of have given their lives in the service of their country. Also in attendance was the Mayor of Westminster.

After the parade the President, Chairman and other members of the RSStG attended a short ceremony at the tomb of the Unknown Warrior in Westmister Abbey.

The Cadet Corps were originally formed in 1860 – a year after the first Territorial units were raised. The cadets groups traditionally take part in the Royal Society of St George's annual parade in London, with which it has had a long association.

The cadet units have since evolved into voluntary organisations, offering young people opportunities to develop themselves.

The cadets are sponsored by, but are not part of, the armed forces and there are currently over 131,000 members across the UK.

Major Angie Richardson of the ACF told a reporter from BBC London: "Being in the cadets... gives young people the opportunity to participate in challenging, fun and, most of all, safe activities. It's inspiring and they can achieve a great deal from personal achievement to qualifications and it embraces teamwork and the cadet forces help develop leadership and confidence."

She added: "In London as a whole, we have around 3,500 cadets and about 450 adult volunteers. It's different from the Scouts as the training follows the Army proficiency syllabus - this relates to military training, from map and compass, to field craft training and also embraces adventure training and community work."